The Angelus - September/October 2021: Women and the Church 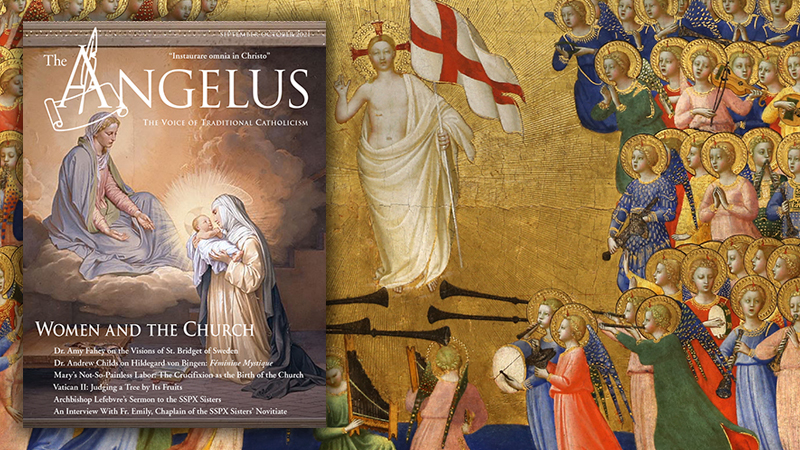 The issue’s theme invites you to explore the important role women have played in the Catholic Church from its divine establishment through the present day.

I am pleased to welcome you to the second issue of The Angelus following the new format inaugurated in the July/August edition.

The issue’s theme invites you to explore the important role women have played in the Catholic Church from its divine establishment through the present day. Rather than present a “theory” of the proper role of women in the Church, we have opted to provide informative and edifying accounts of the myriad contributions that women have made to the Corpus Mysticum through the centuries. Examples include the mystical visions of St. Bridget of Sweden, the devout and intellectual life of St. Catherine of Siena, and the heroic witness of the ladies of Mexico. Of course, no series on women and the Church would be complete without exploring the nearly unfathomable role the greatest woman in history has played in the life of the Church, namely the Mother of Our Lord, the Blessed Virgin Mary.

It is impossible to ignore, however, the manifold ways which the forces of liberalism, modernism, and relativism have distorted the appropriate role women have in both the Church and society. Pernicious ideologies such as feminism and gender theory have conspired to obscure the differences between the sexes in the natural and supernatural realms. This has led to cries from within the Church for such impossibilities as “women’s ordination,” the forerunner of which has been a steady expansion of the role of women in the Church’s liturgy as altar servers, lectors, and even preachers. By focusing on the traditional role women have undertaken in the Church since time immemorial, I hope this issue presents a counterweight to contemporary errors.

In closing, I wish to also draw your attention to the “Faces New and Old” section immediately following this letter. I am proud that The Angelus will continue to feature its veteran contributors while also making way for the next generation of Catholic voices to continue the work of restoring Catholic Tradition.

How to Read This Issue: